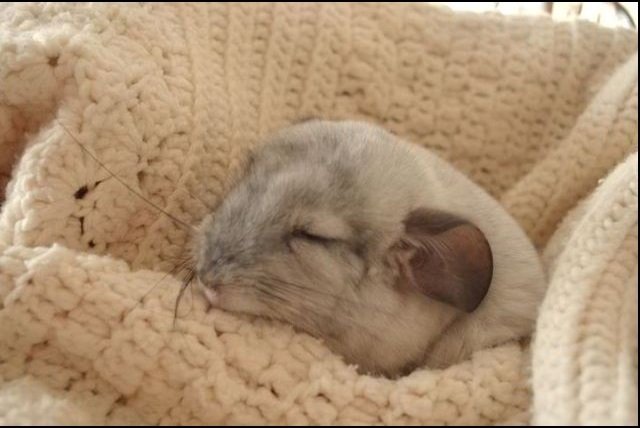 Getting used to another being’s sleeping patterns can be a wild ride, and this does not just go for getting to know another human’s sleeping habits… it can go for pets, too! Take chinchillas, for example.

How many hours does a chinchilla sleep?

This can vary from animal to animal. Just like humans, some chinchillas just require more sleep than others—and some are just lazier. Generally, for a chinchilla’s amount of sleep, though, 12 hours is the average.

They do not necessarily sleep this all at once. When they go to sleep for this chunk of time, they are not 100-percent, always in a “deep” sleep. They tend to sleep in varying blocks of time, which they divide up with snack breaks—who doesn’t love a mid-nap snack, right? How long a chinchilla will sleep depends on the chinchilla, though. Some might sleep for only 45 minutes, while some can sleep for two hours at a time.

Now, when do they take these small naps? This is more standard among all chinchillas—but it can, of course, vary depending on the chinchilla’s preferences. It is commonly thought that chinchillas are nocturnal—which is technically correct—as they seem to be more active at nighttime than the daytime.

But, the better definition for a chinchilla’s sleeping preferences is crepuscular. This simply means they are most active during dusk and dawn, with a preference for sleeping mostly during the day, but chinchillas will still sleep at night should they wish to do so. They will also learn to mimic their owners sleeping patterns, too, sometimes. So, you may find them sleeping sporadically through the night the longer you have them.

A word of warning: the artificial lighting in your home around where their cage is placed, can affect their sleeping pattern. They do not like direct sunlight and prefer naturally lit, quiet spaces. You cannot control a chinchilla sleeping pattern, but this will help them possibly acclimate to yours!

Reasons why my chinchilla is sleeping more than usual.

Chinchillas already sleep a lot, compared to our standards, so it can be disconcerting when they seem to be sleeping way more than is normal—even for them. There are several possible reasons why your chinchilla might be sleeping a lot more than is usual.

If a chinchilla is sleeping a lot, the number one thing they are going to want to do is sleep. They do this because sleeping lowers their movement and helps them conserve their health. Sicknesses caused by things like heatstroke requires them to rest a lot more so their body can heal itself.

When a chinchilla has been playing too much, their energy lowers, so they need to spend more time sleeping to recuperate that energy. If they consistently burn more calories than they consume, they will burn themselves out, and sleeping is the easiest way to fix that. How much sleep is too much?

So, it has been covered that chinchillas’ sleeping habits vary from pet to pet, but the typical range during which most chinchillas sleep is 11 hours minimum, 14 hours maximum. If you notice your chinchilla sleeping a lot past 14 hours, it is about time to feel concerned.

When a chinchilla starts to sleep this much, they are lethargic, and long-term lethargy can begin to weigh on the chinchilla’s overall health. Here are some signs that your chinchilla has become lethargic:

READ :  Are Chinchillas Easy or Hard to Take Care of? These 8 Reasons Will Amaze You!

1. No interest in playing

As mentioned before, chinchillas love to play around. If you notice they are not doing this at all, and are sleeping instead, it is a sure sign they are becoming lethargic. Not being physical can result in depression in chinchillas, which only exacerbates the lethargy. Not only is not playing a definite sign your chinchilla has become lethargic, but if they are not moving at all, it is even more sure they have become so.

Even when chinchillas are not necessarily “playing” they still like to walk around and explore a bit, but a lethargic chinchilla just sits very still. It can even look like they are sleeping, and it can be confusing—because chinchillas will sometimes (creepily) sleep with their eyes open. But you will notice an attentiveness that only awake chinchillas can have to show they are awake…just sitting there.

Because a lethargic chinchilla is not moving as much, they will not get as hungry as often and their appetite will become suppressed. Therefore, you will notice a significant drop in their eating and drinking habits. This can, obviously, be very detrimental to their health and wellbeing if left unchecked long-term, as it can cause them to drop weight and damage their nutrient intake.

Chinchillas typically sleep bunkered down over their feet, straight up. If you notice your chinchilla sleeping on their side—or even on their back—you may want to pay extra attention to their health. Some chinchillas just like to sleep this way, and pregnant females like to sleep on their sides for comfort. But, if you have never noticed your pet sleeping like this, be wary that something might be wrong. Chinchillas typically do not snore when they sleep. They can make noises while they are sleeping, of course, because they do dream and will sometimes vocalize their dream experiences. But it is not usual for them to snore. This can be a sign they are sick or have developed a lethargy-related health problem.

How can you help a lethargic chinchilla?

So, if you notice your chinchilla behaving as if they are lethargic and are sleeping a lot, there are a couple of things you can try to help them get back to their normal patterns and help.

If your chinchilla is sleeping a ton, there is a huge chance they are bored and do not have enough to do, so find things to get them moving. Get them a bigger cage with lots of obstacles to climb, give them a dust bath—they love them—or simply get them out of their space and show them some old-fashioned, undivided, parental attention.

Chinchillas can be a lot like children in that they love to be paid attention to and played with. Sometimes having their owner just sit with them can give them a burst of energy and happiness. Since sleeping can be a side effect of poor nutrition, perhaps you should give their food labels a double look because they could be consuming too few or too many calories. It is important you know exactly how much they are eating. If you are the person controlling their food intake, then any sicknesses they may incur due to malnutrition is on you.

Make sure you are giving them the proper amount of food and water every day, as well as some good exercise, and hopefully, their sleep will correct itself.

Sometimes, there just is not much you can do for your chinchilla on your own. They are exotic animals, and if they are behaving oddly, it may just be best to leave their healthcare to the professionals. You can help control their exercise and their food intake, but you cannot control sickness.

It is important you recognize when your chinchilla is sleeping too much or sleeping abnormally, because then, you can try to help as best you can as fast as you can—but give yourself the mercy from feeling guilty if you cannot help and take them to see a proper veterinarian.

Overall, chinchillas just take some getting used to, which takes you paying attention to their personal habits. Once you get to know them, they are lots of fun and perfect for people who work during the day. Sometimes, all you need to come home to is a happy chinchilla, and then, your day is made.